They didn't speak. Instead they walked hand in hand toward the hotel where Cooper stayed. He kept contact with Beth's hand brushing it with his fingers, clasping it securely before letting go of it only to repeat the process. It was not nearly enough but he didn't want to spook her so he settled for that small gesture. 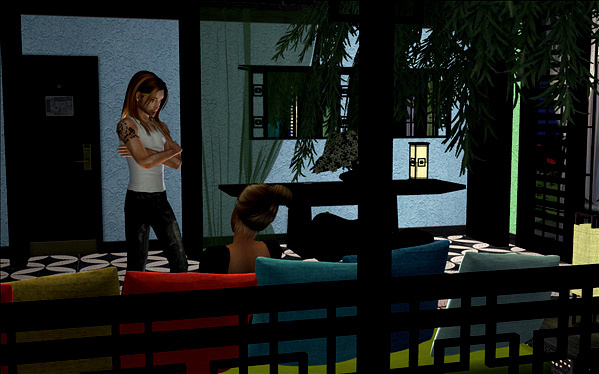 When they arrived at his hotel, Coop led her up to his suite. He'd moved around a lot since they separated but this place suited him. It reminded him of the house they were renovating on Fire Island Way before it all went to shit; it felt as close to home as it could without having Beth and his little girl with him. 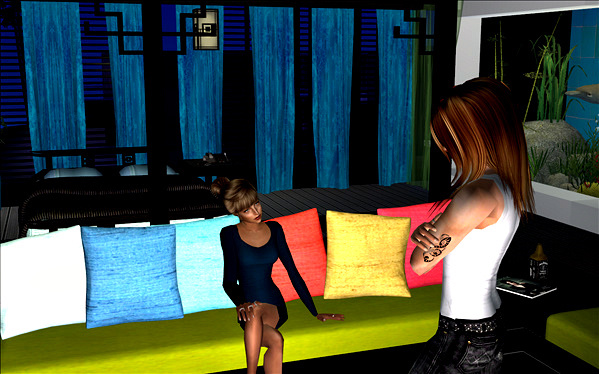 Fluffing a few pillows, he gestured for her to sit, paced a bit and glanced over her shoulder at the bed behind them. He would much prefer to do his talking there, show her how he felt, but that would be too much, too fast and they would be right back where they started with nothing settled. He wanted to clear the air, start again fresh and make it right. 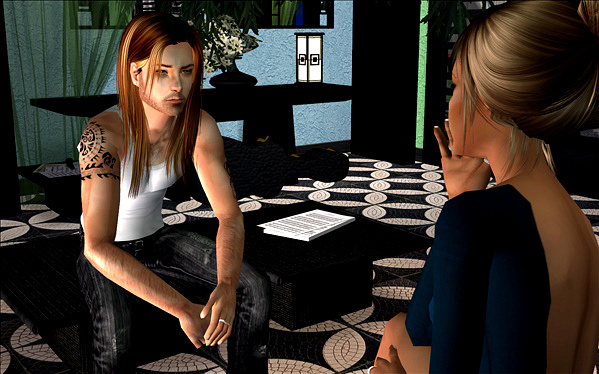 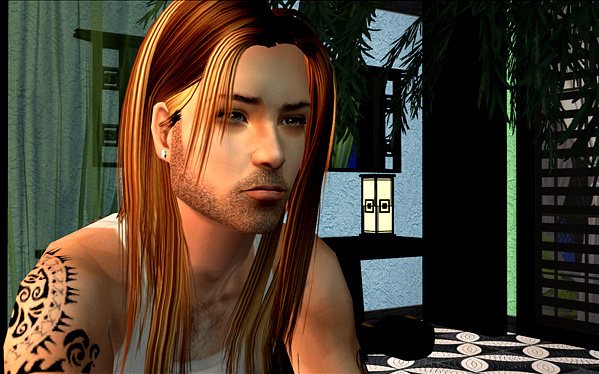 He exhaled and then sat on the coffee table in front of her. Dangling his hands between his legs, he looked into her eyes and searched for a way to reach her, a way to unlock the door and come home. 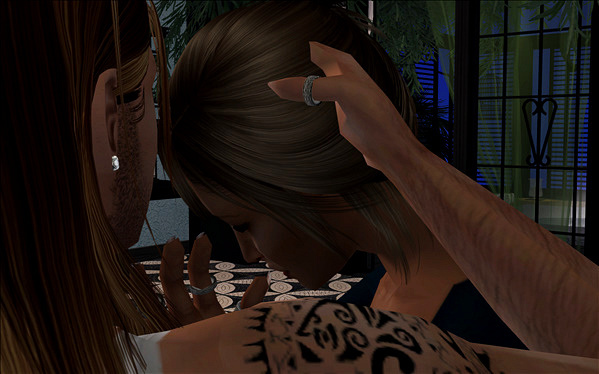 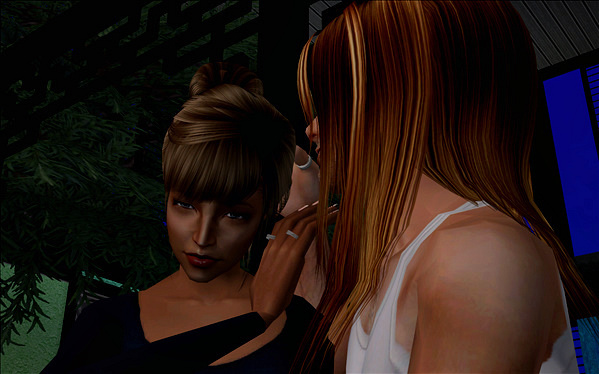 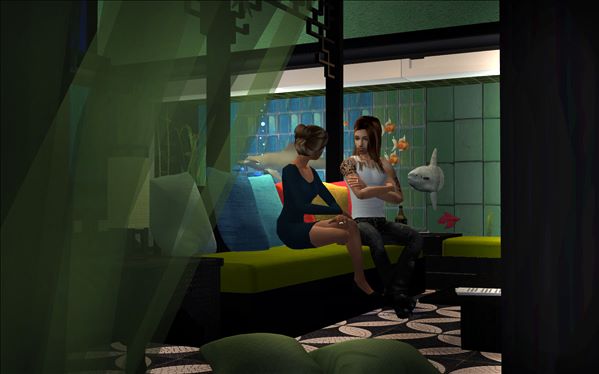 They sat there in silence for a long time before he joined her on the seat. He turned toward her and tucked a loose tendril of hair behind her ear. "I wrote something for you. I wrote it because I don't want to go on like this. I want to come home, be with you and Hugs. Maybe we can't put it back like it was at the beginning, but I know you, and you’re not any happier than I am. You need me as much as I need you. Will you listen?" 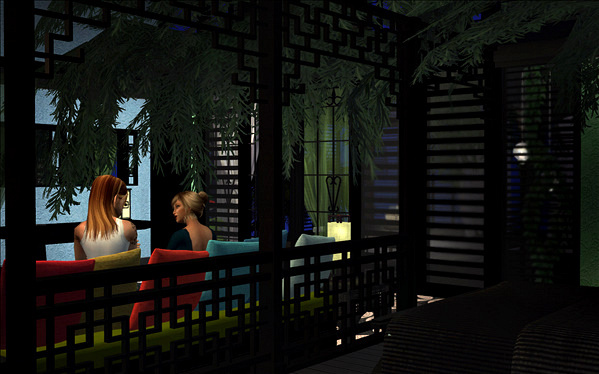 She’d put her hair up and she was wearing something he’d never seen her wear before, and although it was attractive, it wasn’t her. She was using it as armor, shutting up her breasts and tying up her hair and hiding in there. The long bare back was the only thing left of the woman he knew and loved. Her cheeks flushed, and he was close enough to feel the heat from her body.  If he touched her neck, he knew he’d feel her pulse jump.  You can’t hide...I know you. 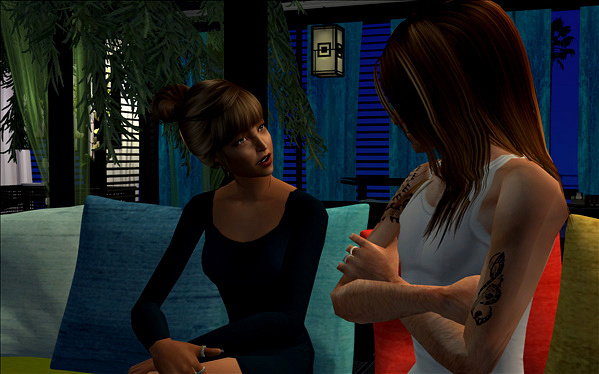 Hesitating, Beth looked toward the open door where the caged birds flew and settled and left and returned, watching them, letting them go, pulling back from him, looking back at him.  Familiar and distant, the one and the other. She was a little drunk. One of the best women he'd ever gotten drunk with, a lot of memories good fucking memories, but if he couldn't keep her here tonight he was going to make sure she got home safe. In a voice not much louder than a whisper, she told him, "I'm not coming back. But I'll listen." 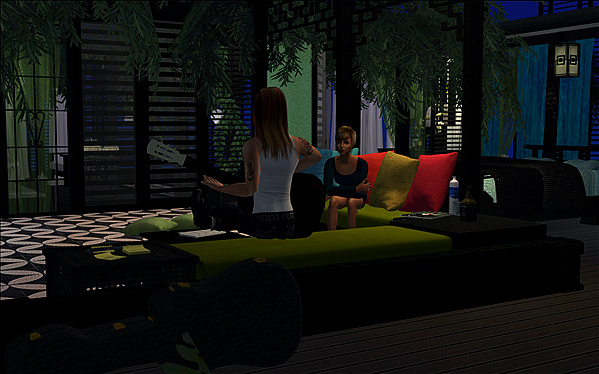 He smiled, held her gaze for several seconds before rising and walking towards his Gibson.  Gripping it in his right hand, he settled back down across from her, positioned the guitar and ran the neck lovingly through his hand.  “I sent the lyrics home with Hugs that day she and Bunny toppled into the fountain, and I’ve been told they didn’t survive. I’m realizing that she did me a favor.” 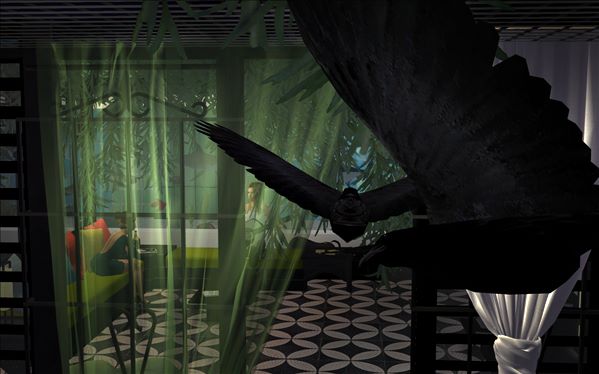 She leaned toward him.  She always leaned into him when he sang, when he spoke, the long empty moment watching her lean and knowing if he didn't get this down, they were both lost.  And as he sang his words of love to the only woman who could inspire them, the lyrics wrapping them both in a tightening harmonic web, a web that brought the birds down, light and air and the rush of black wings as he sang her back to him. 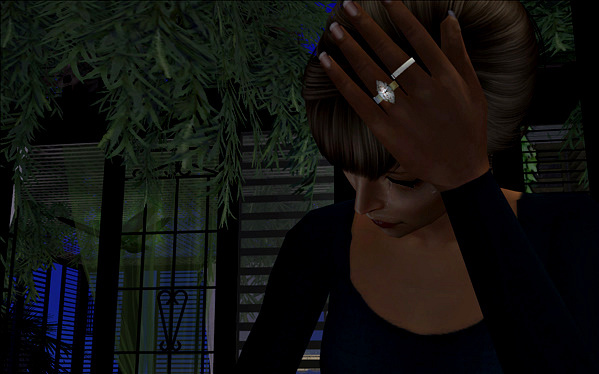 She put one hand to her face, the diamond he had given her, the wedding ring, both of them still there, still shining, and she wept. 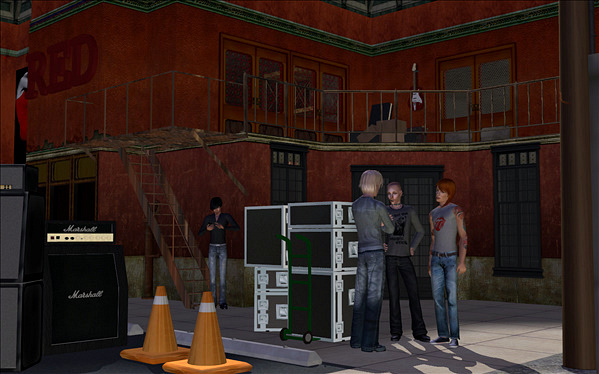 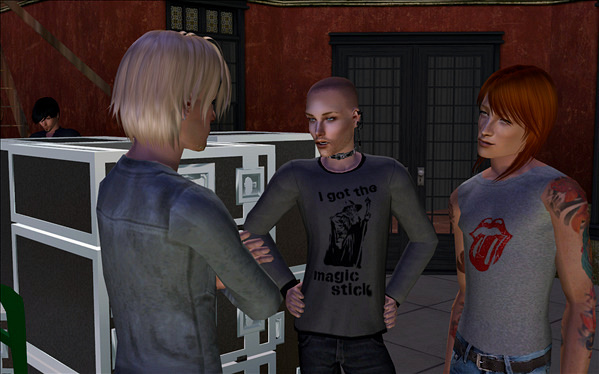 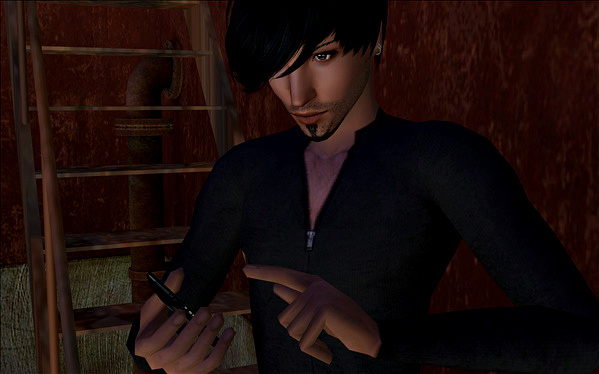 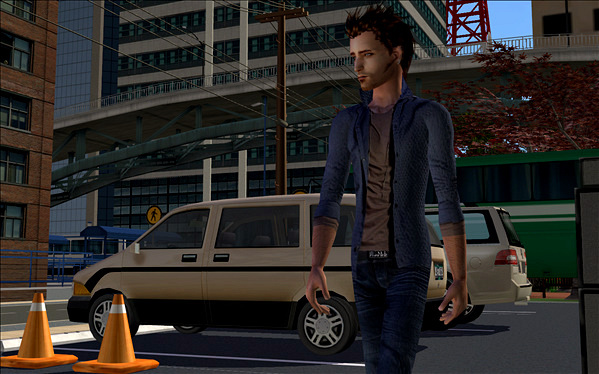 Alex asked her to meet him downtown near the studio, knowing he didn't have the time now to set something up at home. The roadies were loading equipment into the van for tomorrow's RMA performance while Rob directed them, Shooter pitched in, and Duff lounged against the wall talking on his cell.  Alex left them to it and strode across the street toward the park, his own cell buzzing before he made it past the fence.  He checked it, uneasy: she was running late, she was parking. 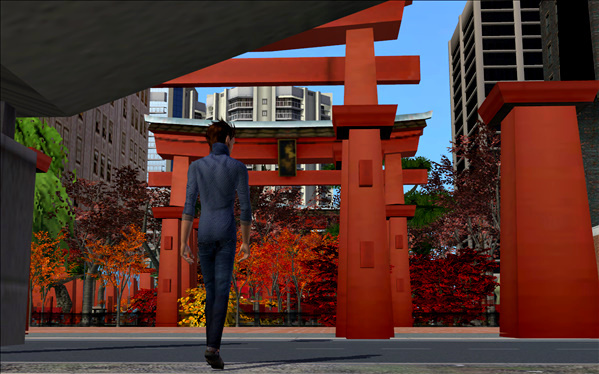 Alex didn't bother to return the message since she wouldn't expect it and he hadn't worked out what he was going to say.  Maybe he should offer to go ahead and take her as a date even though it no longer felt right.  He wasn't sure what her reaction was going to be when he told her about Dani; she probably wouldn't want to go with him.  It was hard to tell.  He didn't know what she was thinking or feeling and had to admit he hadn't gotten as far with her as he'd expected.  More than likely she wouldn't care, and that in itself was kind of disconcerting.

She looked ragged, and despite himself Alex couldn't help but compare her to Dani.  He pulled himself together and walked up to her. "Hey, you know what, we need to talk." Beth glanced at the trees that were still a brilliant blaze of color and shrugged. The park was empty, nothing but a tourist and somebody dealing with the dying flower beds.  She walked past him down through the arch near the pool.  "I have to tell you something," he began.

She didn't seem to hear him.  She reached up and and stroked the red dying leaves on one of the trees and then looked back and smiled.  "Okay, me too."


It was starting to feel worse than he'd anticipated.  The fountains in the pool kicked in, sputtering, spraying old water all around them.  She finally sat down on a bench and crossed her legs and looked at him. "Thanks for making me feel better."

She stopped, glanced away, took a quick light breath and continued.  "I really mean it, Alex, but I’m ending things.  It’s not about you and it’s not about anybody else, it’s just not what I need to be doing right now.  And don’t tell me your heart is broken because it’s not.  Now it’s your turn."


Wait...what? Caught off guard, his first reaction was to persuade her otherwise, to fight back, then he realized that she was making it easy on him and went right to the heart of it. "I'm going back to Dani."  He sat down next to her. The pool fountains chugged and spurt up again, and she swept her hair back, her eyes dark, big bags under her eyes.  He struggled past some anger about Cooper and what he knew about her, which wasn't much, but she wasn't the bitch he thought she was when he started this game.

"So you were in love with her all along."  It was a quiet, satisfied statement. 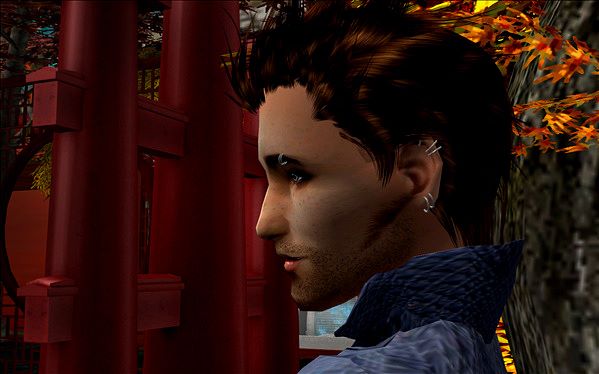 "I guess...” he hesitated and looked away, grappling with how much he wanted to reveal. Things with Dani were still too new, too fragile. He hadn’t yet completely come to terms with all of it; how could he adequately explain when the words were elusive even to him?

He turned his attention back to Beth.  “Yeah, I guess I was...am in love with her.  You called it.  We're good, though, you and I, right? I mean, here I was thinking I’d be breaking your heart."  He smiled, relief replacing his worry. 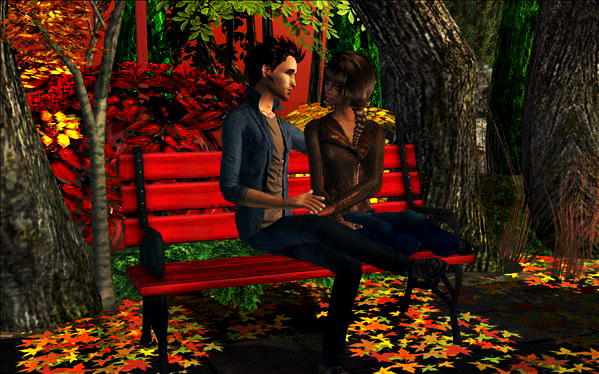 She smiled back, shifted on the bench and took his hand.  "I did call it.  Yes, we're good.  I'm going to take off now, but we really are good, Alex.  Take good care of her. And I guess you lost the game." 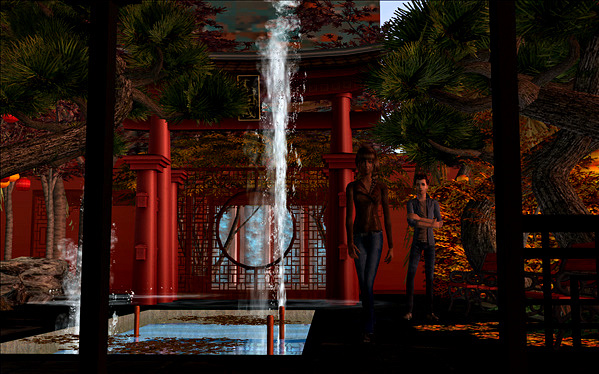 She slid up off the bench and moved fast, one long stride after the other, going somewhere under the red falling leaves and the failing light, and he got up and yelled after her. 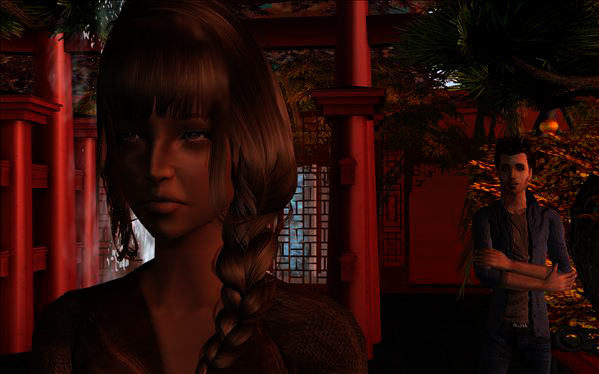 "Give it a chance, Beth.  Give it one more chance.  Do that.  Hey I know you hear me, give him a fucking chance!  And I didn't lose shit, it's not over yet!" 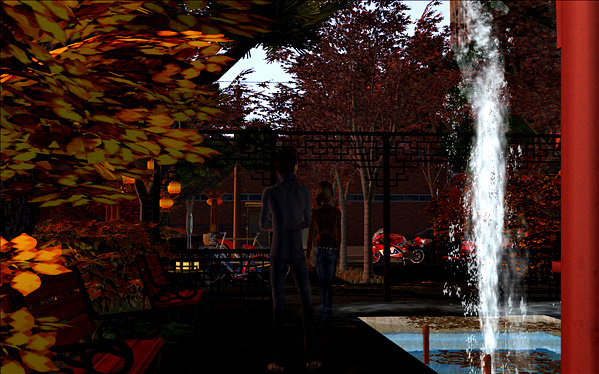 He expected her to keep walking. Something went down between her and Cooper, Rob was never wrong, but she stopped and looked back, letting the wind tear at her hair and the dying light ruin her face. For an instant, he thought she might have some glib comeback but she offered that enigmatic Mona Lisa smile and said nothing at all.