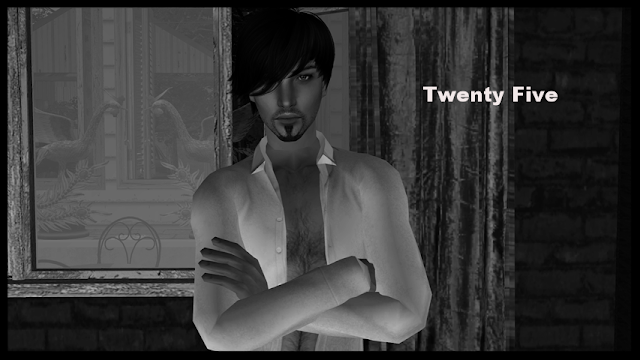 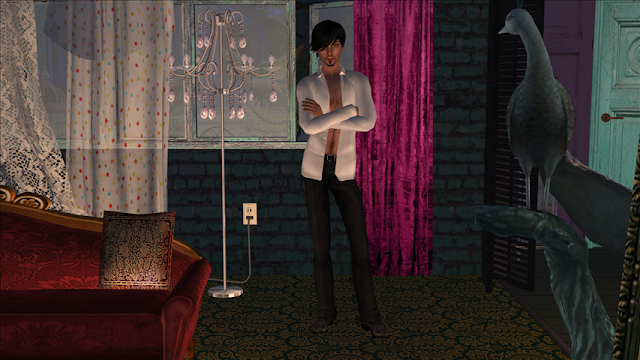 Rayne’s admission took him by surprise. Duff folded his arms and stared at her, stunned with anger and intense jealousy, an emotion to which he rarely succumbed. He’d been confident in the progression of their growing relationship to the point that he’d underestimated both the swamp rat’s place in Rayne’s life and her compassion for the boy. His assumption that she’d severed those ties was a mistake he didn’t normally make. He’d dismissed the relationship and its significance. Now, he struggled with the prospect of a sexual relationship between Rayne and Jimmy. She was his. 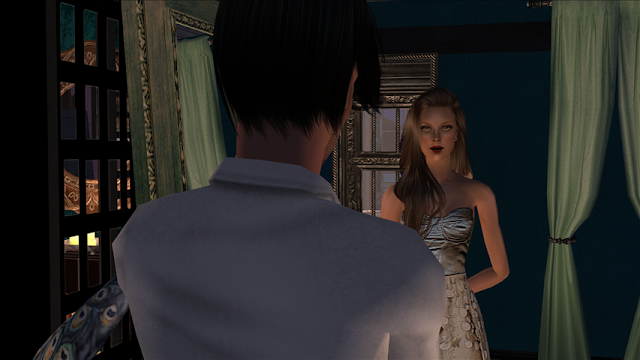 He had tried a variation of this move at the gallery; Rayne had called his bluff and threatened to break his arm in the process. He'd had three months with her since then, though, three months to pull her close, to gain her trust, to push his own control past limits he'd never tested, and he felt confident she would not let him go.  Adequately confident.  Not, he had to admit, completely certain.  Stepping away from her, knowing she might step back in retaliation, knowing he had given himself no room for error, Duff swallowed hard and took a second step.  This was not a game, not a test of wills. For him it was a hard limit. 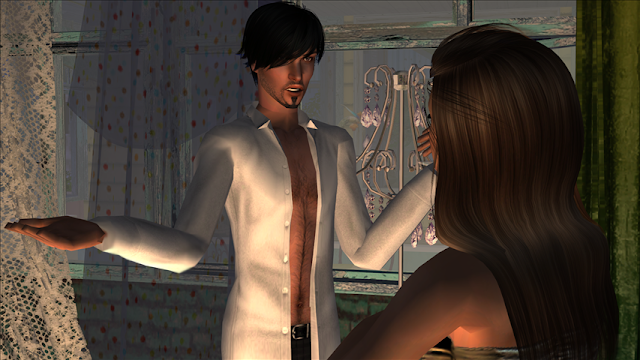 So angry he had to fight to keep his voice steady, Duff bit out his response. “I fully expected you to cut ties with Jimmy. You have not done that. Let me be clear—I will not share you at all, not with anyone. That you put his needs before mine cuts to the quick. Rayne...I've waited for you, I don't want to leave, but I can't stay with you when you're still with another man.”

He saw the shock sweep across her face.   “What?  Why?  You're leaving because of Jimmy?  We're just friends - I'm not sleeping with him, I haven't even had lunch with him in a month.  I can't walk out on him, Duff.  You don't understand about Jimmy.  He needs me.” 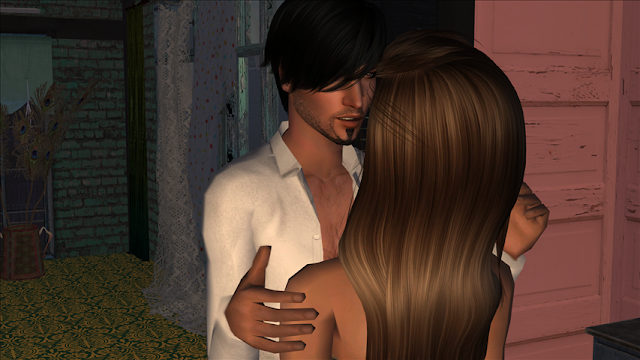 He was not really certain she was being honest about the 'lunch', and was very certain Jimmy Breaux did not consider the relationship limited to lunch.  Son of a bitch.  Not tonight.  Duff closed his hand around her shoulder, tightened the grip, and pushed her harder.  If she did not take him seriously now, she never would, and it was as much over as that fucking lunch.  “I need you cara. I want to be the center of your world and I won’t share you.  I can't do it.  If you change your mind, if you end it with Jimmy Breaux, completely end it, let me know.  Perhaps we can talk.” 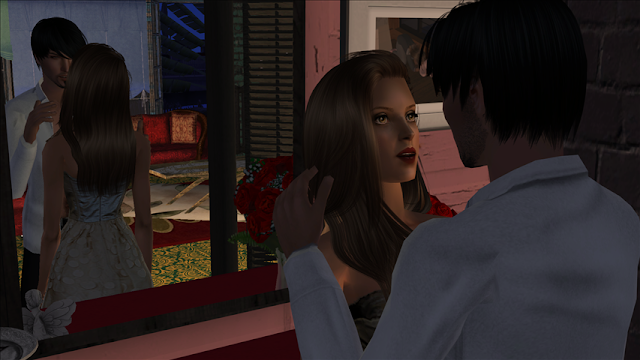 She did not move, caught in his grasp, smooth skin under the grip of his fingers, then he felt the deceptive muscle in that slender bicep flex and harden.  Rayne was a complex combination of strength and innocence, ferocity and tenderness.  She said one word.  "No." 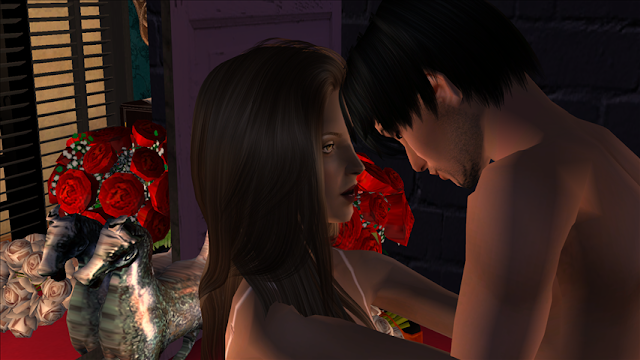 Rayne grabbed the waist of his slacks and pulled hard until they slammed against the table scattering trinkets onto the floor. She quickly worked the buckle of his belt open and unzipped his pants. She wrapped her fingers around his erection as he lifted her onto the table. She spread her legs and caught and held him around his hips, circling him with silky arms and legs. pulling him close. There was his tigress. 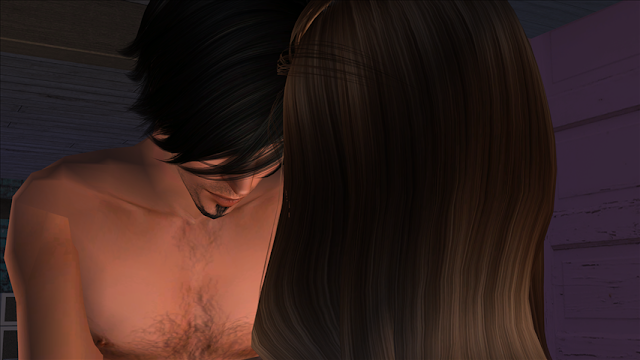 “I've already decided."  Something fell off the table and with the sweep of her other hand she knocked another small trinket aside and let that one fall, too.  "You can't go.  I've waited months and I'm not going to wait anymore just because I haven't said something to Toad.  I'll tell him, just make love to me, I want it all, everything.” 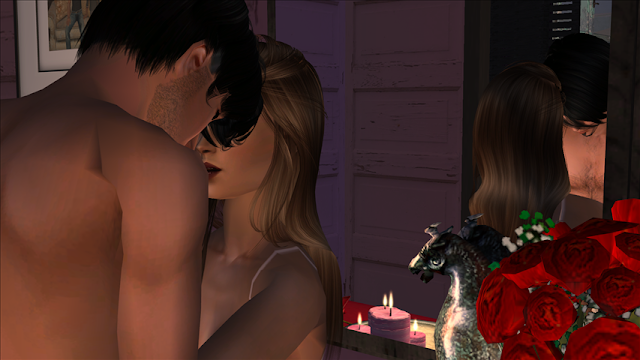 Her mouth an inch from his, her breath on his lips, Rayne's  eyes alight she moved onto him and breathed, "Don't leave.  You're not going to leave now, are you.  Please." 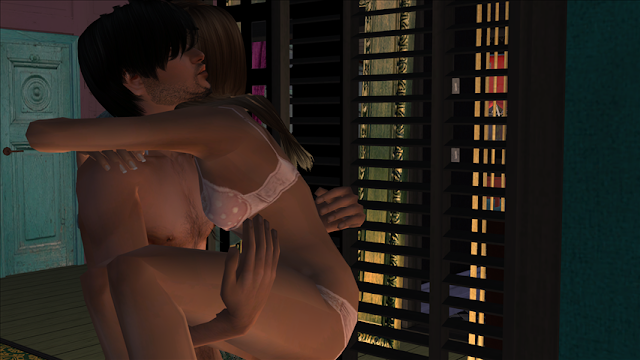 Duff groaned. The anticipation and fantasies he’d had about her couldn't hold a candle to the reality. Heaven. Rayne’s fingernails scored his back as they rocked back and forth. The little table creaked underneath their weight. If they kept going the thing would splinter into pieces. He lifted her off the table and carried her to the bedroom.  The old floor could open up and empty them into the beach - it would not stop him now.

It was a porch bedroom, siding and brick and long windows in warped frames open to the wind off the channel. Rayne had furnished it with an old bed and a silver vanity table, one candle burning, flame blowing in the same wind.  It was unexpectedly beautiful. 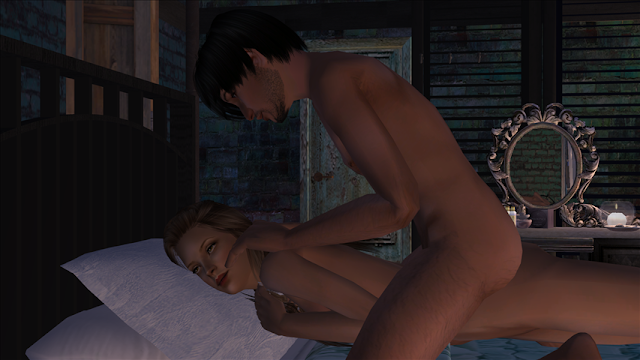 Duff carefully stepped across the room and laid her face down on the bed.  He roughly grabbed a fistful of her golden hair and leaned into her.  For a moment her body tensed then she yielded. 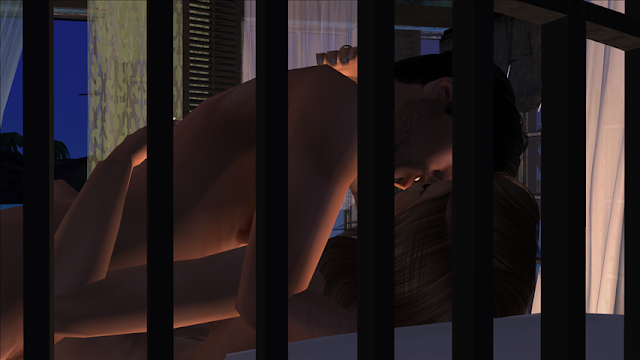 There was nothing, not here, not now, not with this woman, nothing more he needed. 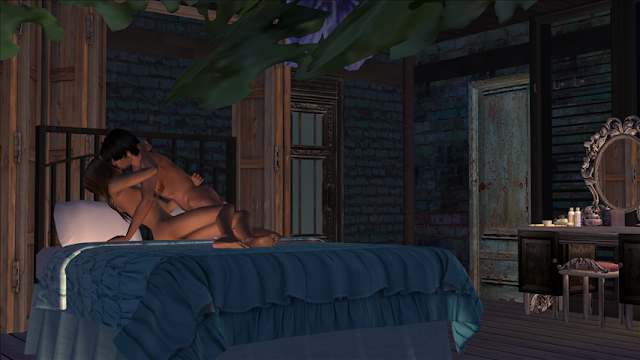 The tigress had walked willingly into the cage... 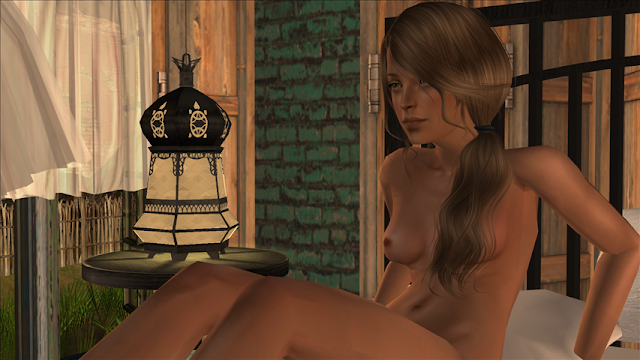 The early morning sun sifted through curtains shading the bedroom windows facing the channel between the islands. Rayne buried her face in the pillow unwilling to allow the sun to disturb her dreams. Her body still hummed from the sex she and Duff had. They’d made love most of the night. She was no virgin but his sexual expertise far surpassed anything she’d ever experienced. God, some of the things he’d done to her… 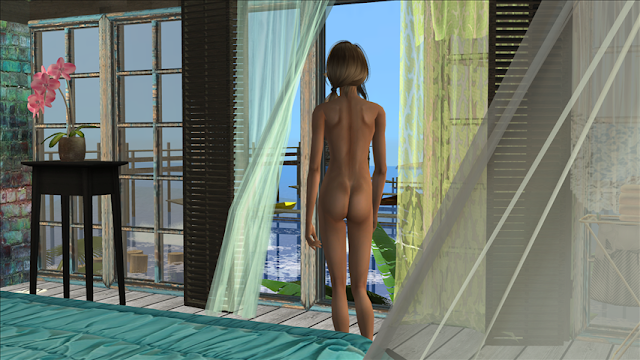 She’d wished he’d stayed the night but he insisted he had to leave. Had she told him she would move in? Had he asked her that? Vague memories of whispered words and promises came back to her. In the haze of lust and passion, did she agree to give up her beach house? It wasn’t like she couldn’t keep the place just in case. But if she cut ties with Jimmy, she really didn’t need the place anymore did she?

Jimmy. He was fragile but in truth they’d already drifted apart. The band was barely a band at this point and they’d find a replacement for her. Or for him. She’d known for a long time, ever since she met Duff, that Jimmy wasn’t the man for her. That didn’t make what she needed to do any easier. 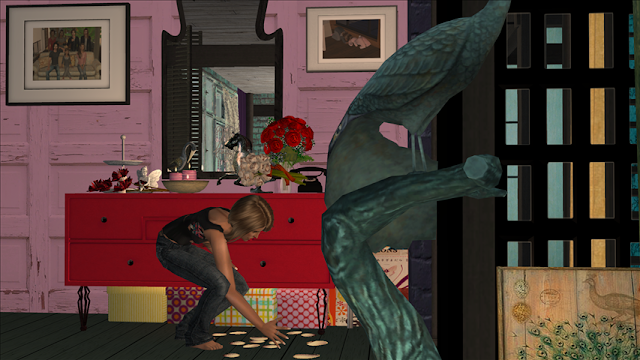 Rayne climbed out of bed and threw on a pair of old jeans and a ratty tank top. She flipped on the radio and headed to the kitchen to make coffee. Halfway there, she stopped to pick up the stuff she and Duff had knocked off the table the night before. With the exception of a few shells she and Toad collected, most of it remained intact.


“The unconscious body of Jimmy Breaux, lead guitar and front man for the band Brew, was found on the beach behind his house early this morning by a local jogger. Paramedics arrived on the scene and rushed him to the hospital where he was pronounced dead on arrival. The immediate cause of death has not been released…” 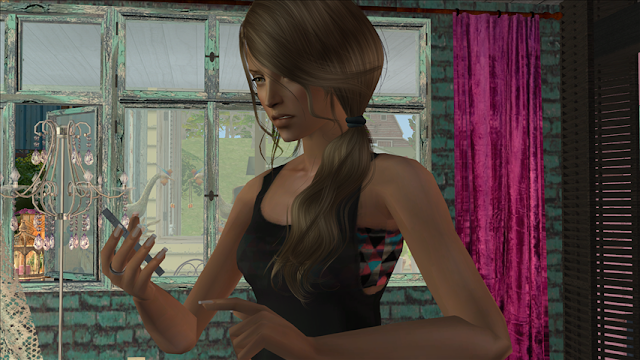 Sea shells spilled from Rayne’s hands as the news sank in every word slicing through her, cutting her.  Oh god, oh god, oh god.  No, no, no, that can't be true, it's a mistake, it's somebody else, it’s a lie! They’re lying! Where was her cell? There, on the floor. With shaky fingers, she punched in Jimmy's number but the call went straight to voicemail. She tried again. And again. This was a sick joke.  Woody set this up or that stupid pink sunglasses girl who wrote for the paper, she could do something like this.  She'd just go over there. 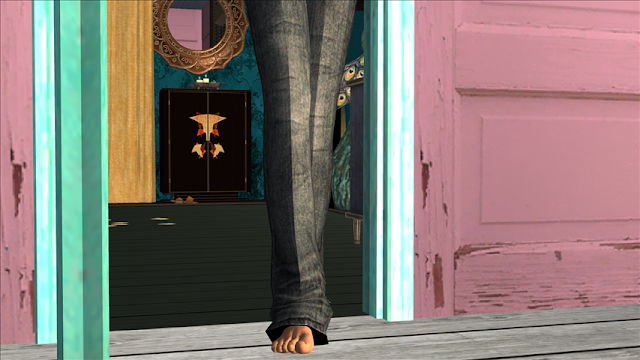 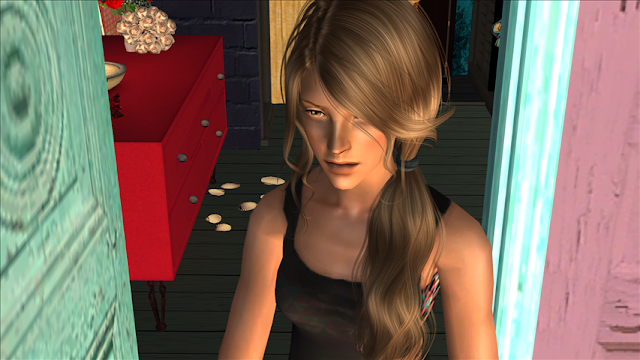 She'd taken three steps toward the door when someone knocked. She knew it! God, she was going to kill him. Or someone. Relief overwhelmed her as she ran to the door and threw it open. 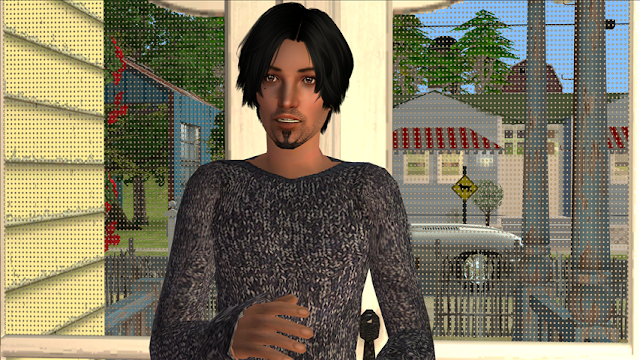 He was disheveled, he hadn't shaved, his hair was a mess, he wore a sweater and jeans, he let the screen door bang shut behind him.  "I came as soon as I heard." He took her in his arms and held on tight.  "There was traffic, the drawbridge was up, it took too long." 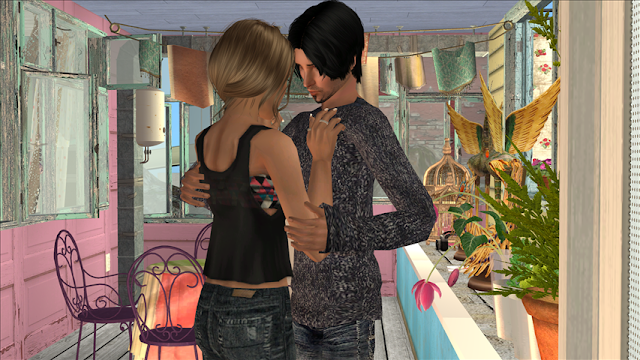 "No, you don't believe that shit do you? Tell me it isn't true!" Rayne searched his face for reassurance but found none. She felt her knees buckling and clutched at his shirt relying on his strength to support her. 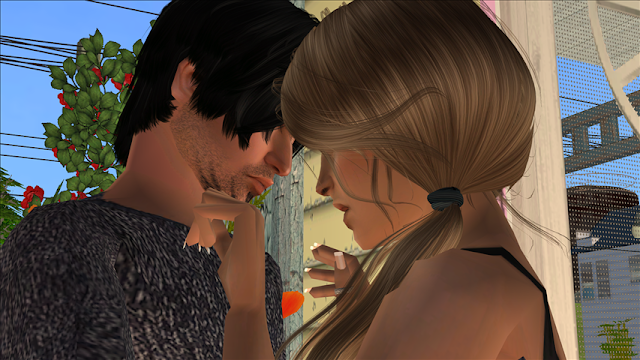 "I told you he needed me.  I should have been there for him! I betrayed him, Duff!  I told him I would stay and I didn't!  It's my fault!  I can't--I can't breathe. Get me away from here!" Rayne sobbed uncontrollably. 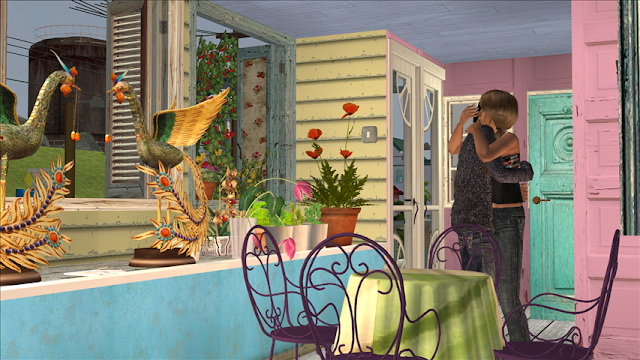 Duff stroked her hair, brushed her temple in a light kiss, standing there on the screen porch in the early morning light, holding her. 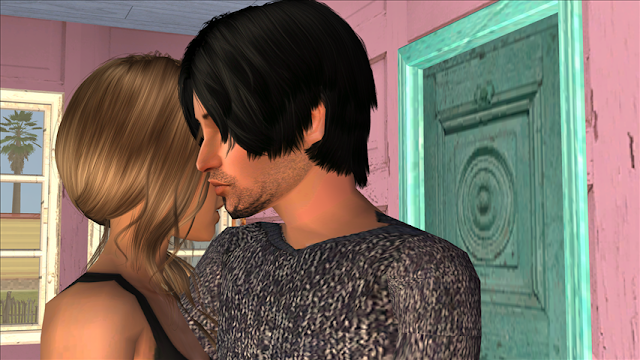 "Hush mi amore. I'm going to take care of you, cara.  I'll take care of everything.  You will never have to worry again."