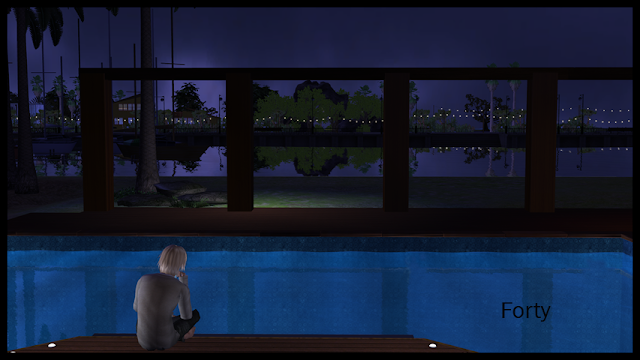 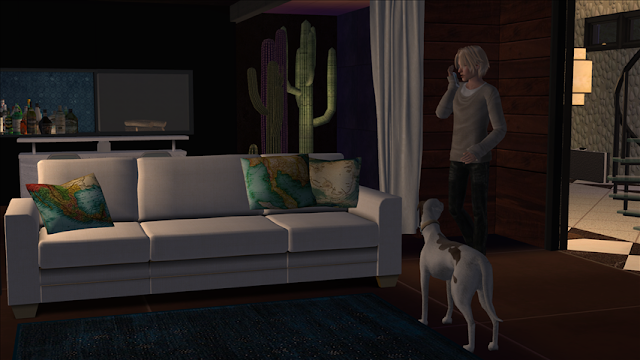 Rob spent most of the afternoon dealing with the fallout from Duff's firing or quitting or whatever people wanted to call it and the people out there on twitter and everywhere else were calling it firing. Some of them thought he was jealous. Most of them thought he was a dick.  He hadn't finished packing and the house was cold and Alex was screaming at him again about Duff.

Rob held the cell with his right hand and tried to calm Charlotte with his left hand as she paced back and forth silently watching him.  She recognized the suitcases.  She knew they meant he was leaving. He'd specifically asked Clare to pick her up before he hauled the cases downstairs and that had been an hour ago and she wasn't here. Alex kept screaming.  Alex was running out of expletives at this point.

"Who the fuck do you think you are?!  You can't fire Duff!  You can't fire a fucking roadie without telling me you're gonna do it!  I've been over to Duff's place trying to get him to change his mind and I don't have time to do that!  That's why we hired Royce to keep you from babysitting the band like my fucking grandmother!  Take the damned stick out of your damned - " 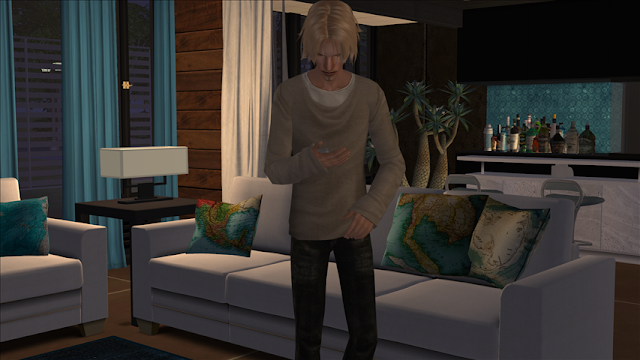 Rob hung up on him.   He stared at the phone and waited for Alex to call back so he could hang up on him again.   He didn't call back.   He might be on his way over.  No, probably not. 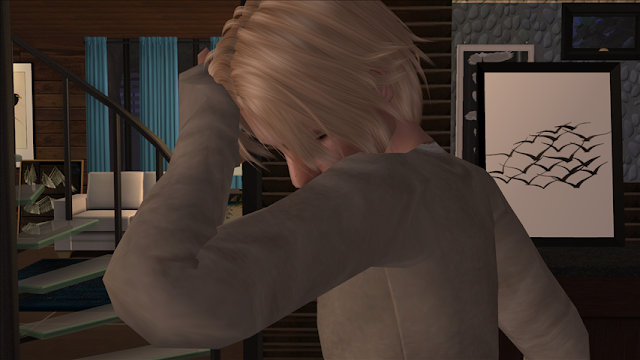 He walked toward the kitchen, aimless and anxious, the evening's headache lurching from one side of his skull to the other like a fat man looking for a chair.   It would stumble around like that all night. He had nothing in the place but aspirin and alcohol and neither one of them would slam it down. Why was Clare so late? 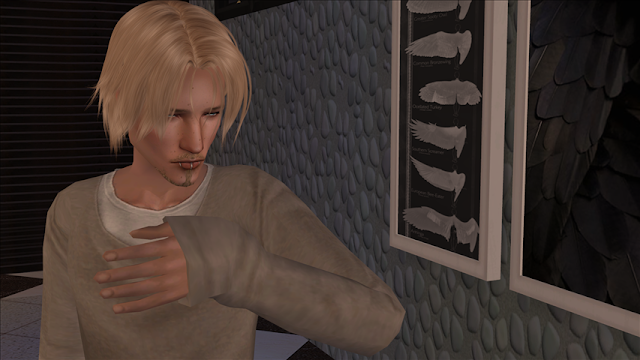 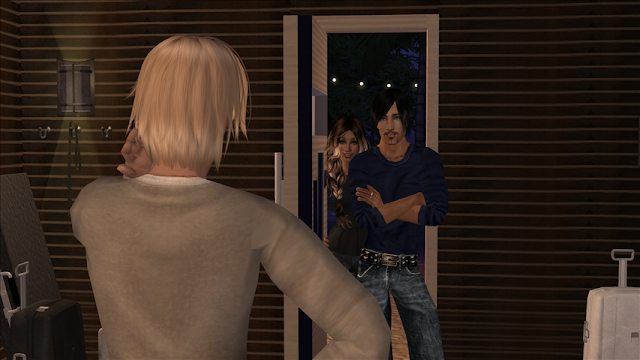 He pulled the door open.  It wasn't Clare.  It was Shaun Holloway and the wife who didn't need a babysitter.  Stevie looked at him from behind her husband's considerable bulk.  She hadn't changed all that much from her glory days as Storm Warning's drummer, but no one was ageless.

Shaun smiled at him.  "Hey man, we were down the street picking up the stuff from Royce and thought we'd stop by long enough to say thanks.   We know you're busy and we've got to get back so you know we're not gonna take up your time."

What the hell...he couldn't turn them away, he'd probably scare Shaun, and he felt uncertain, maybe he hadn't given them everything they needed, he didn't remember.  "No, yeah, sure, it's okay, come on in." 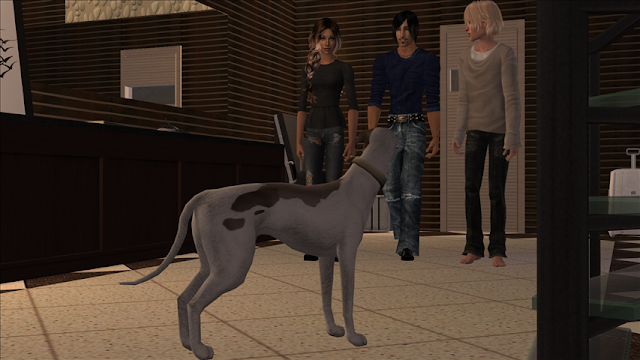 Shaun strode down the middle of the foyer with a big smile on his face.   "I've got my gear already in route.  Your guys packed it up a couple of hours ago."

"Oh yeah?  That's good."  The phone rang again.  He'd turned the volume down but it rang and rang and it was impossible not to notice it.  It was probably Alex again.  Shaun and Stevie apparently decided to pretend it wasn't ringing.

Charlotte stepped out into the middle of the room,  happy to see people, and Stevie looked delighted.  "Is this your dog?   Can I pet her?   What's her name?"

"Charlotte, and yeah she's friendly.  It'll make her day if you pet her."   The distraction would be good - Charlotte would get attention and maybe forget about the suitcases and it would keep Stevie busy while he talked to Shaun. 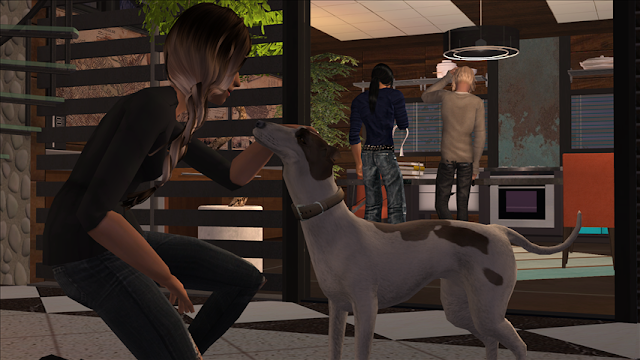 Stevie knelt down next to Charlotte.   Rob went on into the kitchen with Shaun.  "Nice place, right on the harbor.  You've got a great view." 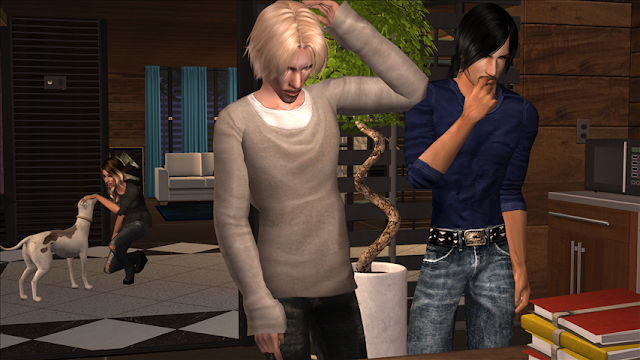 Rob had already put his laptop away but the files were still piled up on the table.  Shaun would need them.  "Thanks. You should take this.  The schedule, everything's printed out in case you don't want to look at it online but I think I sent all that too."

Shaun looked at the stack of folders. 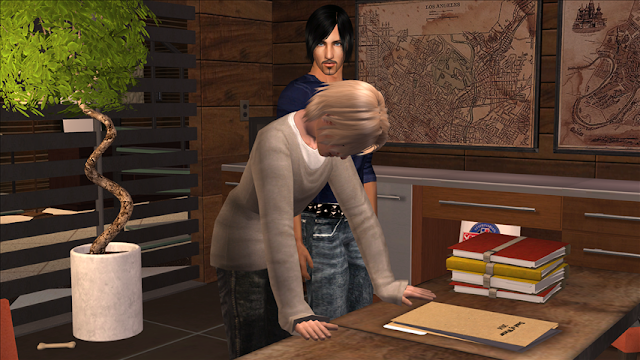 "Uh,..you know Royce already gave us all this stuff.  We just came from her place.  I thought that's how we're handling it, that Royce does all the scheduling, all the managing."  He sounded confused.

Yes she did.  Royce did that now.

"Yeah, when you've been doing something like that for years, you kinda keep doing it even if somebody else is supposed to do it.  Even after, you know, it's been kinda a while." He sounded fake cheerful like he was trying to be helpful, trying to give him a justification for forgetting Royce did that stuff now and had for months. 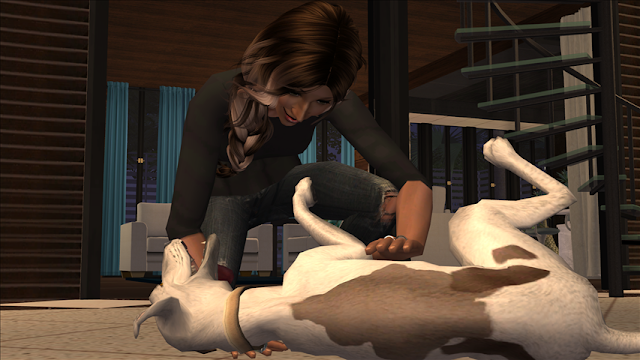 Behind him, Stevie was still petting Charlotte.   Charlotte danced around on the tiles then rolled over and showed her belly.  "You're a beautiful old girl aren't you?   Look at you!   What a pretty old girl you are!" 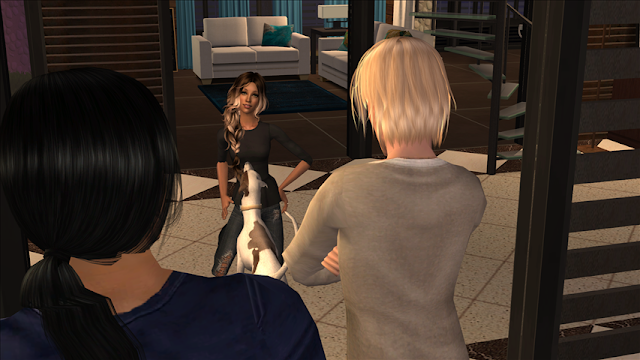 "She looks good for a dog her age.  Some people would worry about leaving a dog this old particularly when they live alone and the dog is their only family.  I bet you think about it a lot before leaving her in case something happens when you're on tour." 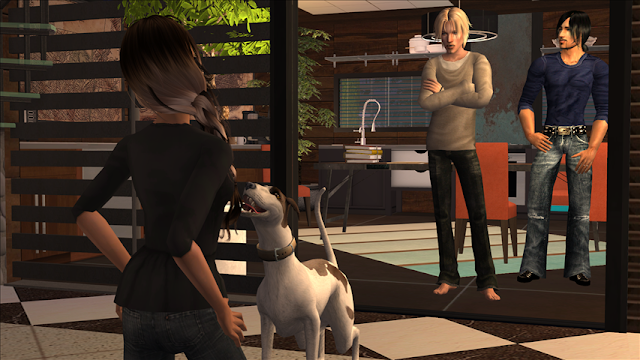 Oh no she didn't, she wasn't going to tell him what to do with Charlotte.  No one got to do that.  Not the woman who didn't need a babysitter, not Alex, nobody.  Rob folded his arms across his chest to defend himself from everybody and the headache and stared down at her.   "No.  I don't worry about her when I tour.  She stays with her vet. There's nothing wrong with her.  I'm not leaving her here to die!" 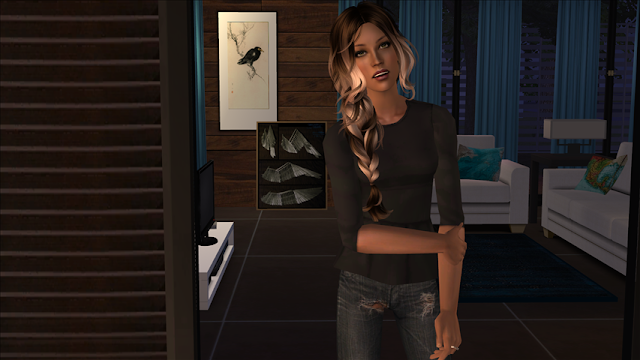 It got very quiet.   Shaun edged away.   Stevie stood up and glared at him.  "What the hell are you talking about?  I didn't say anything about her dying!   I said she's old.   She is.  She looks good for her age, just that limp, but you can't deny she's old!  She is definitely old!  What's the matter with you?" 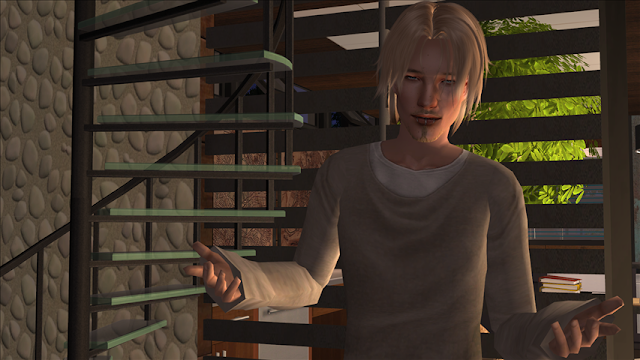 Shaun was moving around him toward Stevie. He was starting to look wary.  Come on, Rob told himself.  Get a grip.

The grip wasn't tight enough.  He tried but he ground it out right back at her.  "She doesn't limp because she's old!  When I found Charlotte she was locked in a cage.  She was nailed to the floor of the cage through her paw.  That's why she limps. I picked the lock and took her.  I know she's kind of old, she's staying with her vet though and the vet will tell me if something's wrong besides the limp. She won't die, she won't die when I'm gone." 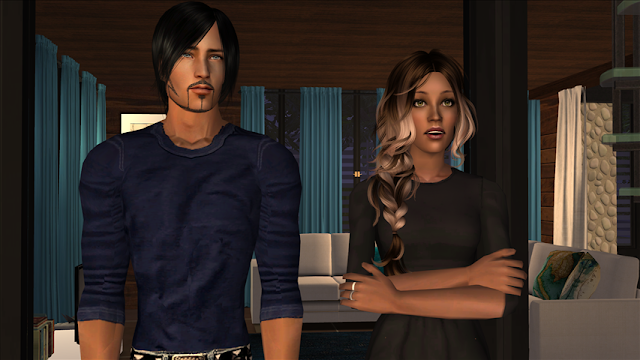 "Oh wow."  Stevie looked horrified. "Who did that to her?"

That was a story with implications and complications Rob didn't intend to share.  The house had been Duff's parents' place and he'd been there to swipe his mother's jewelry.  Duff probably knew he'd stolen the jewelry but it was a long time ago and he never mentioned it.  It was sort of possible he owed him for that and he'd thought about it off and on, more off than on.

"I don't know. I was...uh...hanging around a house and found the dogs.  I picked all the locks and let them all out and kept Charlotte."

Shaun studied him.  "You pick locks?" 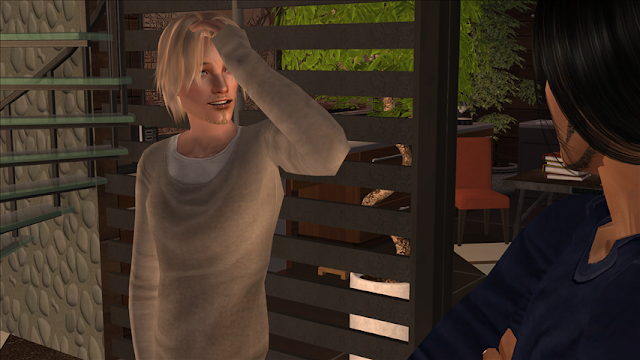 This was turning completely wrong and weird.  "It's a hobby."

"Yeah okay.  Listen we've got to get going it's a long drive back."

Things were sort of slipping sideways, neither of them looked happy anymore, no kidding since he didn't remember about Royce and he jumped down Stevie's throat. Stevie gave him the side eye. Shaun had better control.  "Look I'm sorry, I shouldn't have dumped that on you.   I've got a killer headache, this is the first tour in a while, I'm kind of on edge.  I really appreciate you stepping up and helping us out." 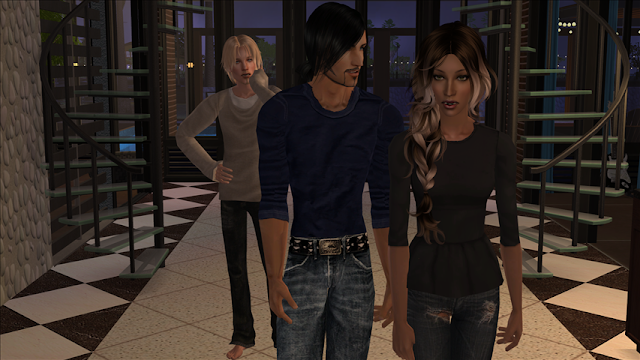 They started for the door, all forced smiles now.

"We have to talk about this," Stevie whispered. 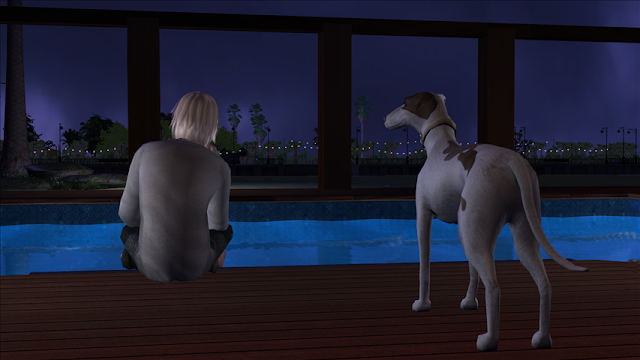 Rob went out onto the deck and sat down at the edge of the pool.  It was quiet.  He was cold.  He grabbed at justification again: Duff made a choice to stay with an unstable girl when he had reasonable alternatives.  Duff was sort of obnoxious in general.  Telling him to fuck off felt right at the time.  Yeah but. 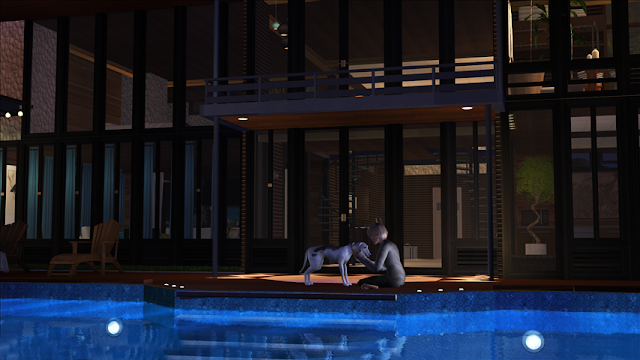 Charlotte came up behind him, whining a little to let him know she was there.  Rob wrapped his arms around her and leaned into her, stroking her ears.  Charlotte sighed.  "Good dog, you're such a good dog."


His phone began to ring again.
"Hey man,” began the voice on the other end.  It wasn't Alex.  It was male, rough, anxious, and young.  It was familiar.  “This is Nate Stanfield."

Rob looked at Charlotte once more, and decided that this time he would answer the damned thing.